DISCOVER THE BEAUTY OF THE SERENGETI PLAINS

The Serengeti is world renowned, and, not surprisingly, one of the largest attractions in Tanzania.

People come from all over the world to see the famous Great Migration, where millions of wildebeest, zebras and gazelles travel across the Serengeti and cross the great Mara River as they follow the rains every year.  Many do not make it to the end of the journey as they run the gamut of cheetah, lions, leopards, crocodiles and other predators during their dramatic journey.

The highlight of the Great Migration in the Serengeti occurs between June and October as the millions of wildebeest head up towards Kenya and the Maasai Mara.

Until you have seen the migration, it is hard to image the clouds of dust as millions of hooves pummel the ground; the grunts and splashes as the wildebeest and zebra cross the river, trying to evade crocodiles along the way; the calls and cries of the animals as they try to find each other in the masses.  It’s a dusty, noisy, enthralling spectacle.  Meanwhile hippos and crocodiles wait in the river – until they get too full and fat and lazy to move very far.  You may also spot cheetahs scanning from the top of a termite mound on the vast Serengeti plains, lions starting their prowl at dusk, and leopards skulking through the golden grasses.

River crossings are seen in the northern Serengeti, but these plains are mostly free of safari-goers outside of the migration season, making it a perfect time to travel. From December to February, the wildebeest herds meet in the south to feed on the lush grass and birth their young. In the Eastern Serengeti, you can find a high concentration of lions, leopards and cheetahs.

Birds of all varieties, elephants, gazelles, impalas and giraffe can be found throughout the Serengeti, along with many other fascinating animals.  During the dry season, animals flock to the watering holes and brush and grasses are lower, creating prime viewing opportunities.  During the wet seasons, bird life is abundant, and tourists are generally fewer, which means you can see wildlife without herds of vehicles gathering around.  Plus the clouds create dramatic backdrops above the acacia.  Driving during the wet can be more challenging and some roads will be inaccessible, so you want to be very sure you have an experienced and careful guide, like those from Destination Serengeti.

Seasonal activities in the Serengeti include viewing the great migration and the wildebeest river crossings (June-October) and seeing the millions of wildebeest calving in the Ndutu Plains and southern Serengeti (late January through February) and predators waiting to pounce.  Mobile Migration camps follow the herds throughout the year as they travel.  Meanwhile, in the northern, central and eastern Serengeti, the Sayari, Dunia and Namiri Plains are open all year for exceptional game viewing and scenic photography. 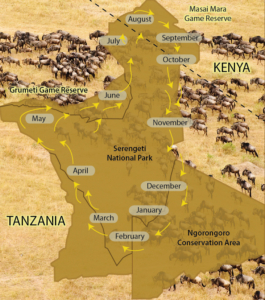 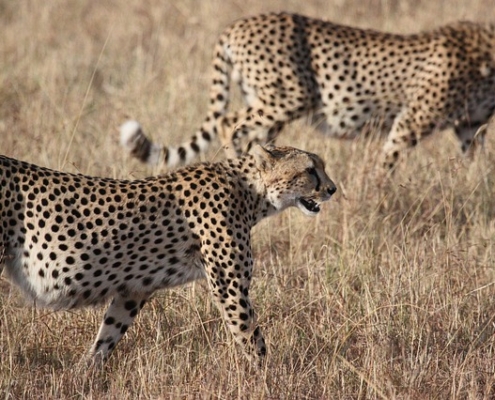 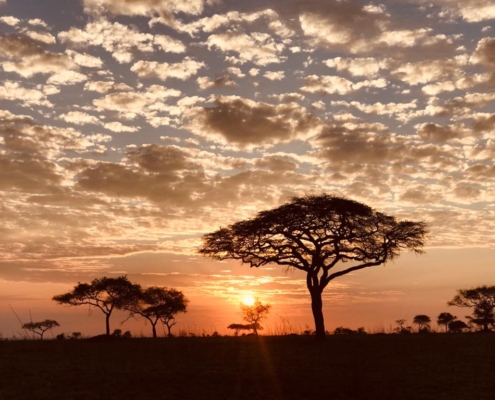 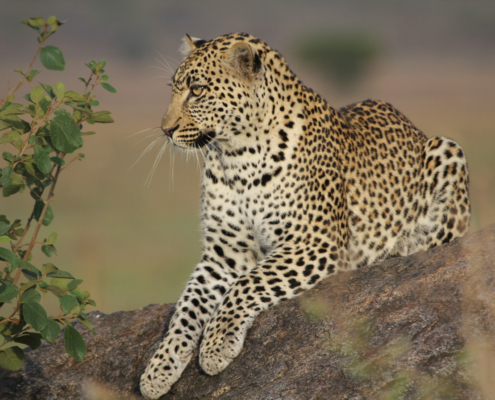 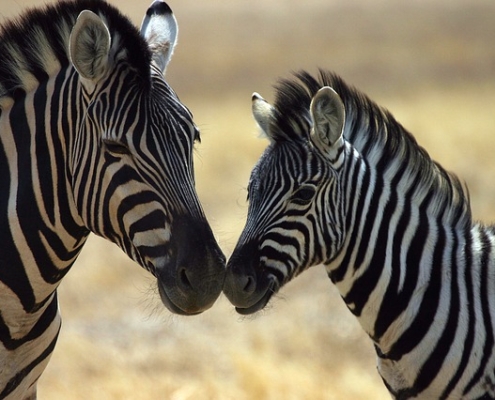 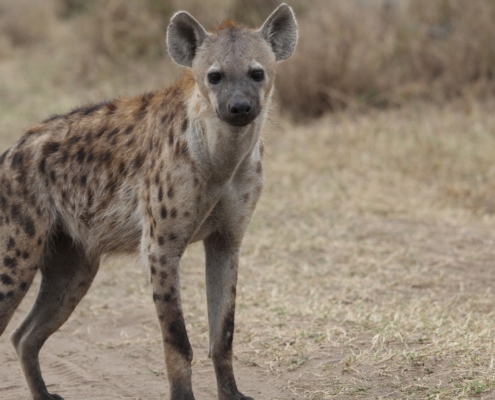 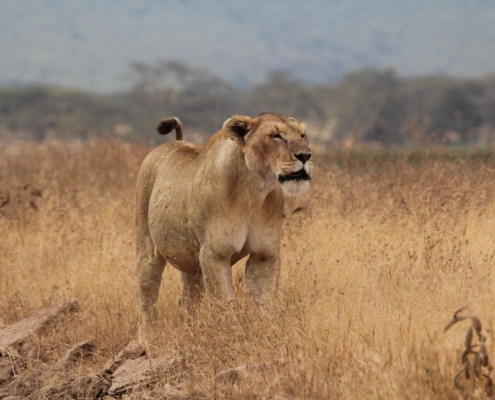 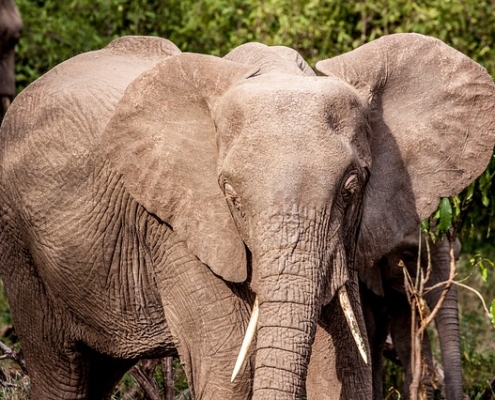 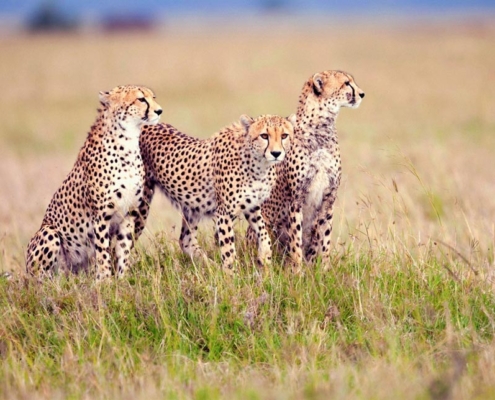 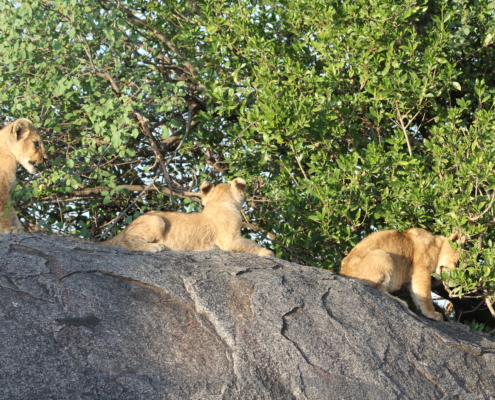 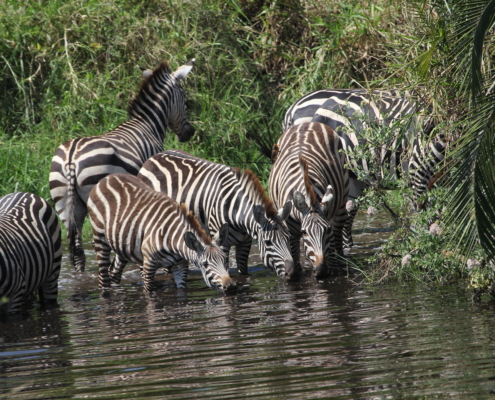 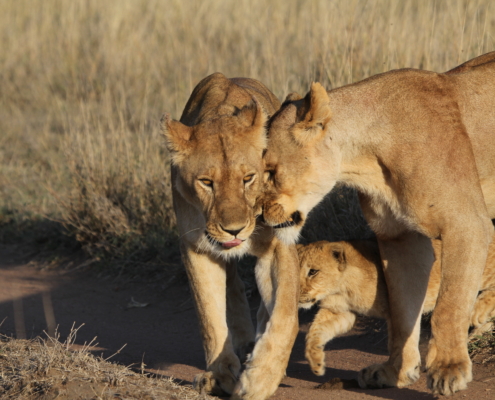 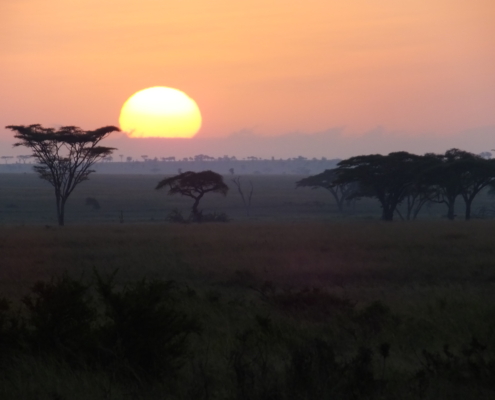 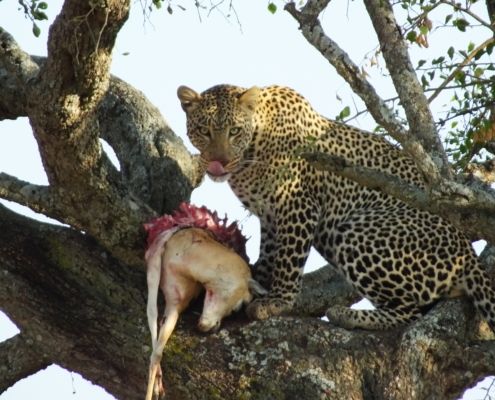 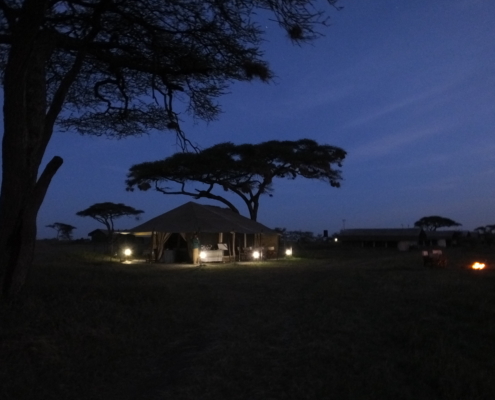 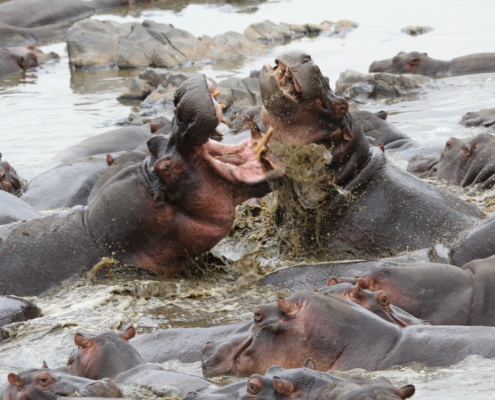 The Great Migration moves around the Serengeti and Kenya’s Maasai Mara in a continuous cycle. The most popular time to see the herds is when they cross the Mara and Grumeti rivers from June to October, but another great time to visit is January to March, when the wildebeest are calving in the south.

A remarkable number of animals, including over 70 large mammals and more than 500 bird species, live in the Serengeti. During the Great Migration, around 1.5 million wildebeests, 500,000 Thomson gazelles and 250,000 zebras travel, following the rains, across the Serengeti-Mara ecosystem in an endless cycle, looking for enough grass to feed them. Not only are there the migratory herds, but all that accompanies them.   Predators like lions, cheetah, leopards, spotted hyenas, wild dogs and crocodiles feed on the migrating herds.  There are hippos in the rivers and pools.  You may also spot klipspringer, oribi, hartebeest and topi, servals, bat-eared foxes, jackals, dikdiks and many other small animals.  Then there are some extremely rare species like the aardwolf and ground pangolin.  Plus a long list of birds, from the famous and beautiful lilac breasted rollers to the fascinating ostrich to eagles and lovebirds and oh so many more!

See the Wonders of the Serengeti with Destination Serengeti

One of my most memorable sightings occured in the Eastern Serengeti where my guests and I were observing a mother cheetah and her sub adults cubs.  All of a sudden, the mother cheetah raced off towards a Grant’s gazelle lamb, which was easy prey for her.  But what happened next was incredible:  she didn’t kill the lamb; she caught it and brought it back to her cubs and released it for them to practice hunting and bringing down their prey!  While this was harsh and cruel for the little gazelle, it was a fascinating learning process that the sub adult cheetahs were going through, and we sat and watched them for over an hour and a half, enthralled.